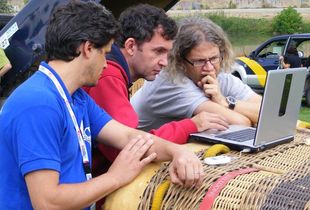 I directed 20 National championship in 8 different country and two cat 1 Event and one cat 2 Event and the first Junior Pre-Worlds. I was deputy director on the last Europeans and four other cat 1 Events.
I was Jury on Worlds, Europeans and Gordon Bennett. Some more Events are here.

Video: top 5 pilots drops and results at Fly in and Hesitation Waltz.

We had a nice Opening Ceremony and Welcome Dinner Wednesday evening but we need to cancel the morning briefing on Thursday. Two tasks was at afternoon: JDG, HWZ (photos).

Friday morning tasks are FIN – PDG – LRN – FON – ANG in any order, some headache for the pilots. 😉

You may find the latest results here at always.

The World Balloon Trophy powered by Shell Gas (LPG) is primarily an international competition of hot airballoons, organized since 1996 by the Cercle Luxembourgeois de l’asbl Ballooning (CLA). 30 to 40 world’s best pilots are given every year go to Luxembourg to compete in one of eight global events first class certified by the Federation Aeronautique Internationale (FAI), and accounting for the world ranking. Since the World BalloonTrophy is traditionally held just before the continental or intercontinental championships, he became the event of reference preparation for the best pilots in the world, like in tennis for Wimbledon Queens.

Homepage of the Event.